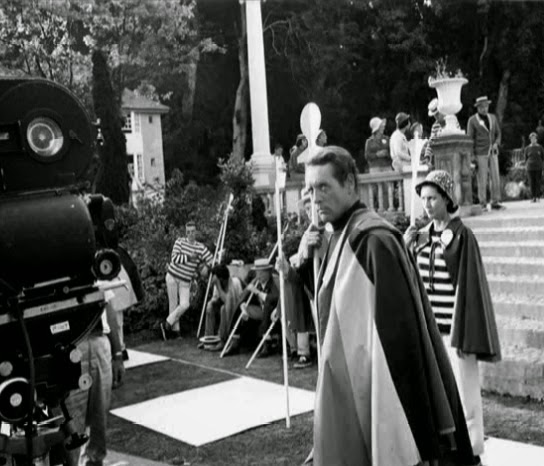 It was on the chessboard that World Cameras finally caught up with Number 6 who granted an on the spur of the moment interview.
“What's it all about Number Six?”
“You tell me!”
“Oh that's very good Number Six. But really, the people out there want to know why you're here, what The Village is all about, and why you resigned.”
“Then they'll have to figure it all out by themselves, won't they?
“Tell me, this episode is called Checkmate.”
“You've just told me!”
“Yes, well we understand that there's a human chess match in it.”
“Yes.”
“Why?”
“That was in the General!”
“What was?”
“WHY?”
“Well Number Six, perhaps you would like to tell the viewers if the Prisoner ever escapes.”
“I don't know, we haven't got that far in filming yet, and the script hasn't been written yet.”
“Does Number Six escape at the end of Checkmate?”
“I don't know yet, we haven't filmed that bit yet.”
“But surely you've read the script?
“Yes.”
“You're not giving much away are you Number Six?”
“No, and I don't intend to.”
“But the people who will watch this interview want to know. We the media want to know.”
“Look, I'll be holding a press conference when this is all over. Any media people, members of the press will get an exclusive screening. Then and only then will I attend to your questions. Now if you don't mind we've got filming to do...... so why don't you take your camera and shove it…..”

BCNU
Posted by David Stimpson at 07:47