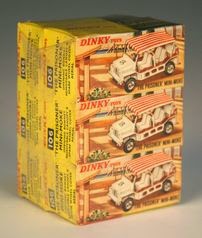 On December 7th 2007, 6 original ‘Prisoner’ boxed Dinky Mini-Mokes sealed together in cellophane, No.106 sold for £1,100 at Toovey’s Antique and Fine Arts Auctioneer in Washington, West Sussex. I remembered an item in an old Number Six magazine, issue 26 from 1991. So after a little research, I found the article about 6 boxed ‘Prisoner Mini-Mokes No.106 sealed in cellophane. Back in the early 1990’s Simon Holmes made the astonishing discovery of the six original Dinky ‘Prisoner’ Mini-Mokes in a catalogue for a then recent toy auction in London. 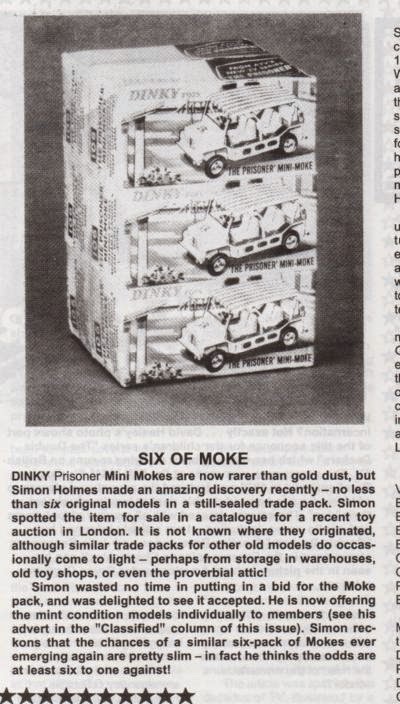 Simon put a bid in for the six models, and it was accepted. His plan was to then offer them individually to members of six of One. It is unknown if Simon was successful or not. If not, I did wonder whether the six models sold in 2007 were the same six models purchased by Simon Holmes in 1991. After all what are the chances of more than one set of six original Dinky ‘Prisoner’ MiniMokes sealed in cellophane turning up? Simon Holmes thought the chances of another “six pack” turning up as pretty slim.