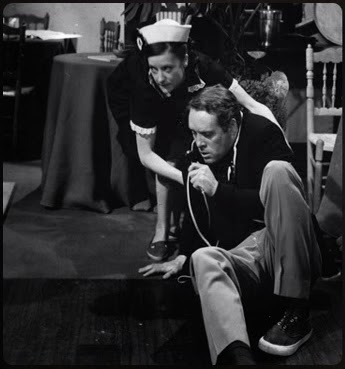 "Look get up onto your feet, you were doing so well. Who is going to vote for you when you're in this state?!"
A scene cut from 'Free For All,' Number 6 having collapsed after singing his election song, is assisted by Number 58. Its a pity that we never get to hear what Number 6's election song is. Perhaps its something about voting for him, "I'm for you, you're for me. Vote for me and I'll be ever so comfortee." Well that's what he's muttering to himself when he's helped out of the Cat and Mouse nightclub. And also Number 2 says it in the Therapy Zone!

BCNU
Posted by David Stimpson at 09:33