The General Not So easy As A B and C!

We note that, in the opening catechism of ‘A B and C,’ Number 2, Colin Gordon's answer to the Prisoner’s question “Who are you?” is subtly different, being “I am Number Two” instead of “The new Number Two.” This gives a strong indication that the two episodes of ‘A B and C’ and ‘The General’ are screened out of the order in which they are filmed, and are chronologically meant to follow each other in sequence. Mind you it's surprising that after the result of ‘The General’ this Number 2 would be given a second chance. After all Number 2 had allowed himself to be out smarted by Number 6. The experiment of Speedlearn brought to its knees, and what consequences this might have is unknown. The General destroyed, and both the Professor and Number 12 of administration dead! And yet this Number 2 lived to face another day, given the opportunity to avenge himself against Number 6, and at the same time redeem his reputation. And yet Number 2 made the same mistake for a second time, he underestimated Number 6!
It is interesting to note that Number 2 is just as much a prisoner as Number 6. This is reinforced by Number 2, Leo McKern, tells Number 6 that he knows too much, that they are both “lifers.” Yet Number 2 of ‘The Chimes of Big Ben’ sustains himself with the idea that the conditions in which he lives, The Village, is the right condition under which to live in pursuit of his “higher” motives, hence his optimism. The Village being a blueprint for world order, and he might aspire to a high position of power within that order.
Colin Gordon's Number 2 on the other hand, is a bag of nerves. He’s tense, and in turn that has brought on a stomach ulcer, hence his need to drink quantities of milk in order to calm and settle his stomach. He is subservient, and that subservience, the fear in his voice comes through strongly whenever he’s on the telephone to Number 1 on that oversized, red curved telephone. {You will note that when Number 2 {Leo McKern} has to speak to Number 1, he is not forced to use that telephone used by Colin Gordon’s Number 2, but the more regular ‘L’ shaped telephone!} The look of fear upon Number 2's face at the end when faced with failure for a second time is conclusive. This Number 2 has no such ideals, no philosophy to sustain him, perhaps that is what makes him so vulnerable, and perhaps this is what this Number 2 has in common with Patrick Cargill’s Number 2, both are afraid of their master. Or simply afraid of failure for a second time, the thought of what might happen to him! Unlike Number 6, Number 2 is not irreplaceable. 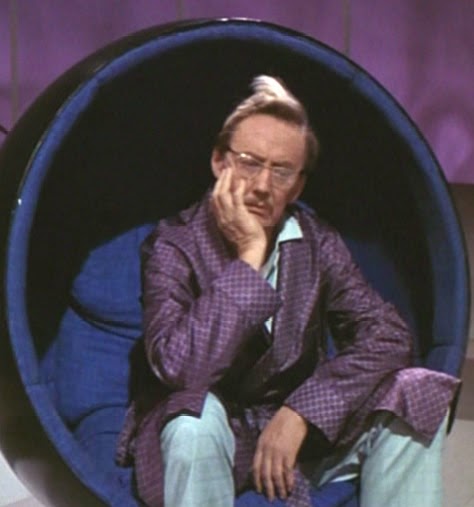 Uneasy lies the head that wears the Crown.