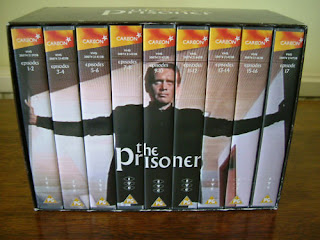 Much of my collection of the Prisoner memorabilia I have had to archive, not having so much of it on display. But that is not to say that I have given up on collecting such memorabilia and merchandise when given to opportunity.
Yesterday I placed a bid, for the Prisoner video box-set which was produced in the late 1990's, on ebay, and as lady luck would have it, I have won the item, for the princely sum of 99pence, plus £6 p&p.
Now I have all the releases of the Prisoner on video and DVD here in England, from the very first release on Precision video, to the 40th anniversary DVD box set released by Network DVD.   BCNU
Posted by David Stimpson at 08:42