60 Second Interview With No.23 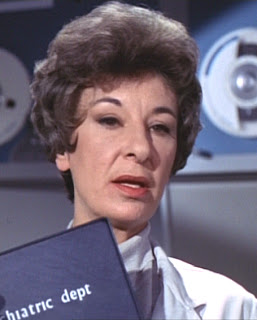 It was with a feeling of trepidation and deja vu, that I took myself off on my next assignment, along with my photographic colleague Number one-one-three b, to the hospital and an interview with the doctor-No.23.

No.113 'I have a feeling we've met before'
No.23 'I don't think so, I should have remembered.'
'Yes I'm sure. But wouldn't you say that you are the female counterpart of the doctor-No.40?'
'Why do you ask?'
'Well there seems to be a striking resemblance between you.'
'Pure coincidence I assure you. There are several doctors here at the hospital.'
'Who like to, and take pleasure from, carrying out medical experiemnts on the citizens here in the Village!'
'Without medical experimentation............'
'You are both so much alike. With that unfeeling attitude towards your patients. Look what No.40 did to Roland Walter Dutton.'
'Who?'
'And look what you did to No.8.'
'That was a mild experiment. No actual operation was required. But some mild conditioning and hypnosis......'
'It's still using an experiment first used on Dolphins. And No.58.....'
'Who?'
'The Rook.'
'Oh him.'
'You used an experiment which Pavlov first carried out on dogs!'
'The treament worked.'
'You treat citizens here in the Village like animals.'
No.113b 'Smile' {click goes the camera}
'I'm not brutal.'
'No, just unfeeling towards your patients. A bad trait for a doctor, wouldn't you say?'
'Work here in the hospital is different..........'
'Different, different to where? Not to a medical centre in a NAZI Concentration camp it isn't. Is that where you and your colleague No.40 learned your trades in medical experimentation?'
'Look. Everyman has his breaking point you know. What's your breaking point I wonder?'
'I'm not going to let you experiment on me!'
'No, who is there to stop me? Perhaps a luekotomy might be better, to knock out the aggressive centres of the brain....'
'No doctor. I'm not one of your patients!'
'No..........not yet perhaps!'
It was at this point that I took to my heels, with No.113b disappearing out of the hospital before me!
Reporter No.113
Photographer No.113b.
Posted by David Stimpson at 08:54