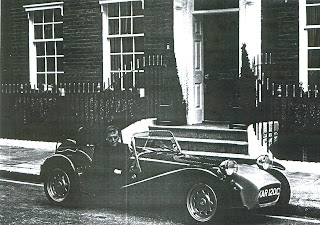 Yes, that is me behind the wheel of KAR 120C, that was back in 1998. Yet it is not the Caterham 7 which concerns us here, nor are we directly bothered about 1 Buckingham Place. It's next door, 3 Buckinghan Place which draws my attention, because I have discovvered whom it was who actually lived next door to the Prisoner, certainly at the time of the filming of the opening sequence.
The Prisoner lived in a large house, with a lounge, dinning room, and several bedrooms amongst the rooms of the house. Now why is it that a bachelor  needed to live in such a large house? How could the Prisoner, who is basically a Civil Servant, earning somewhere in the region of £50 a week, possibly afford the lease of a house in the city of Westminster? 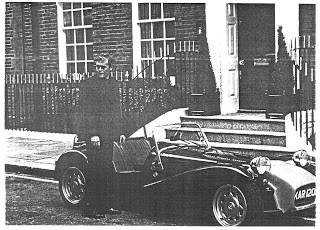 If you have been in Buckingham Place, Westminster, and have studied the houses in photographs of the street, you will have observed that No.3 Buckingham Place is a much smaller house than it's next door neighbour, and I can tell you that the occupant of 3 Buckingham Place was connected to a very high ranking, and powerful family, two members of which, came to visit in the mid 1960's. Really, when I think of the status of the occupant of 3 Buckingham Place, next door would have been far better suited property. And that fact makes me really wonder about the Prisoner.
Oh who was it who lived at 3 Buckingham Place at the time of the Prisoner? Well that would be telling, as it would also be letting the cat out of the bag, to borrow one of No.2's sayings. But it is noted in a manuscript about the Prisoner, which I am trying to see published.  Be seeing you.
Posted by David Stimpson at 09:03