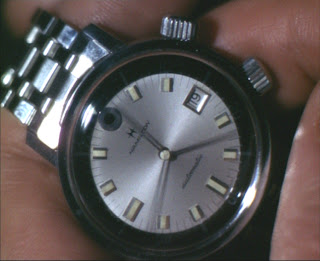 This is the Electro Pass which Number 6 uses in 'Arrival' to get passed the alarm system of the helicopter. It's a Hamilton automatic wrist watch, although slightly amended in this case with a flashing light. But it is not the wrist watch that attracts attention, but the date it displays, as to many fans of the series it shows the date of the Prisoner's birthday, the 19th, which to some means the Prisoner was abducted to the Village the day before on the 18th of March. To my mind the wrist watch does show the date the 19th, but that of September, when 'the Prisoner' was being filmed in Portmeirion.

BCNU
Posted by David Stimpson at 08:55