Spotlight On The Prisoner 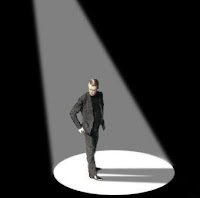 The Prisoner has been called an angry young man. Well he's no longer young is he, he's 38 years of age and that makes him middle aged {for the time} in my book!
He's been described as being Everyman, represenative of you, me, Sid down the pub, anyone, and everyone, in fact he could be anyone except John Drake {according to some} when in fact he's actually Patrick McGoohan.
Why did he resign? Because he became fed up with the uninteresting, uninspired scripts of 'Danger Man.' Besides he'd got something else he wanted to do, something through which he could make a statement for us, that could only be his. He was warning us against so many things. The errosion of privacy, identity, and democracy. Telling us that in years to come we will all be being watched wherever we are, wherever we go. He wanted us to ask questions, to speak out and not to accept things as they are. The Prisoner a rebel, an agitator, who goes stirring things, and poking his nose into things which do not concern him, he might even be...... subversive!
He refuses to join in, to settle down. Refusing to wear his number, and responds to his number only when it suits him to do so. He insists that he is not a number, but a free man or person. He wants to escape, but escape from where? He persists about Number 1, refuses to give the reason behind his resignation, he's a stubborn fellow who never gives up!
Yet the Prisoner is but a television character, and perhaps should not be taken that seriously. Yet he is a character who has endurd over the years, and in all probability will continue to endure.

I'll be seeing you
Posted by David Stimpson at 09:10