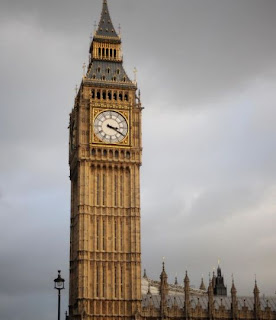 The Chimes of Big Ben rang out yesterday to herald the start of the Olympic games. Not really a 'Prisoner' thought for the day, but as the newscaster said "Today the Chimes of Big Ben rang out forty times over London.........." well I couldn't help but think of 'the Prisoner' episode.
What's more there is talk of re-naming the Clock Tower, from Big Ben to Elizabeth Tower to honour the Queen's diamond Jubilee. The general public are against this, as they want the name of the Tower to remain as Big Ben. Well that's all fine and dandy, but the name of the tower is St. Stephen's Tower, not a lot of people know that. Big Ben is the large bell housed in the tower, and so the general public have come to refer to the Clock Tower as Big Ben. So I cannot actually see what all the fuss is about. They could re-name the Clock Tower the Elizabeth Tower and it can still be called Big Ben, as it has become known, despite having the name St. Stephen's Tower.

BCNU
Posted by David Stimpson at 08:54