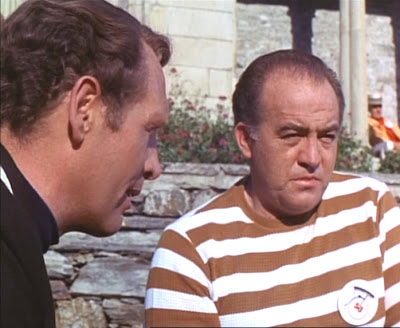 Number 6 "So, what was it that had you brought here?"
Number 53 "I don't want to talk about it!"
"Why not?"
"Who are you, my keeper?"
"I'm a prisoner."
"Oh yes that's rich coming from you."
"What do you mean by that?"
"You know. You're privilaged!"
"How do you make that out?"
"They don't treat you like a dog!"
"You want to escape?"
"Who doesn't, no I didn't mean that."
"So why are you here?"
"I'm not talking to you, you're one of Number 2's lacky's!"
"Tell me anyway."
"I've told it all before."
"Well one more time won't matter then will it?"
"I invented a defence system, I called it Star Wars, and it would have ensured peace."
"Admirable."
"Yes, but I wanted all nations to have it. Then this man in black came for me, I think he was asthmatic."
"What makes you think that?"
"The breathing, it was as though he was gasping for breath all the time. He told me the force was with him."
"He must have been a policeman!"
"He certainly had a funny looking truncheon!"

BCNU
Posted by David Stimpson at 08:52