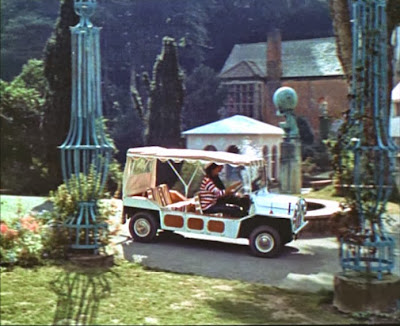 The taxi ride through the Village on the morning of the Prisoner's arrival in the Village. If the viewer thinks the Oriental taxi driver is taking the long way round the Village, driving this way and that, then back up the other way, back along the route, around the fountain twice. When in actual fact the taxi ride was origially much longer than the version we see. This scene was eventually cut, perhaps it was deemed too long. But nevertheless, the cuts made to this taxi ride scene in 'Arrival,' do appear in other episodes of 'the Prisoner' used as stock footage, more noticeably in 'Checkmate' when No.8 the white Queen is following the No.53 and No.6 in a taxi.