It was mid morning when I set out with my photographic colleague No.113b to cover a story about the theft of a closed circuit television camera. "Who the hell would want to steal a CCTV camera?" shouted the editor from across his deck. Well I set out with the intention of finding out.
True to word, the closed circuit television camera which had been set on a concrete plinth high above the centre of the village was missing. Only the camera mounting, which by the way was still rotating 180 digress, remained. However I was certain that the perpetrator of this theft would be captured on film via the higher mounted camera which over looks the area of the stone outlook where the plinth and said stolen closed circuit camera had been set. 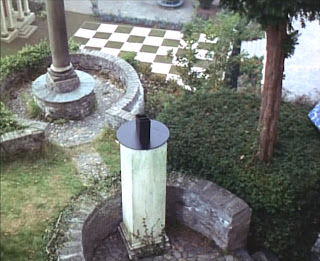 But this was not the only theft that occurred this morning. The telephone from one of the kiosks had been reported stolen, but the report it seems has not thus far been acted upon. A description of the perpetrator is of a short man, rather portly wearing a striped jersey, possibly this was the same man who had stolen the closed circuit television camera. And that is not all, there was a third theft. The electrics department despatched an electrician to investigate camera 34 which had been reported as being "kaput" by the Supervisor-No.56. But of course as the electrician later told me "When I arrived at camera 34's location it wasn't there, only the camera mounting itself was operating." "It wasn't until later that I discovered the theft of a screwdriver and a piece of electrical equipment from the trailer of my electrics truck."
I asked if the electrician had reported the disappearance of the closed circuit television camera, "Not of the missing screwdriver and electrical equipment. I didn't notice they were missing until later." Yet you did report the missing camera. "Yes, as soon as I returned to my electrics truck."
But again it seems that this report, like that of the stolen telephone was not acted upon by the Supervisor-No.56 who was on duty at the time. I managed to get an interview with the said Supervisor. "Well I knew of the reported thefts of course" he told me, but his excuse was that he was heavily involved with a new experiment being conducted by the doctor-No.22. I pointed out to the Supervisor that at the time of the theft of the closed circuit television camera he and this doctor were actually viewing an area of the village through camera 34, and that it was he who actually reported camera 34 as being "kaput." "Well the screen suddenly went black, that told me that there was something wrong with the camera." That it was "kaput" in fact. The Supervisor told me that he had not noticed anything strange before the breakdown of camera 34, even though to be able to tamper with the camera one would have to unscrew it from its mounting and tilt it downwards, thereby affecting the angle of the camera and altering the view projected onto the screen in the control room. At this point the Supervisor glared at me across the dining room table, got up and stormed off, slamming the canteen room door behind him.
My investigations into these thefts have so far led me nowhere and I think I may have been wasting my time. Even No.2 failed to act when it was reported that No.6 had stolen a village taxi, or "buggy" as the Supervisor reported it. All part of some experiment it seems, to do with experiments once carried out on Dolphins. The subject No.8 has been hypnotised, and in the locket about her neck, is a tiny reaction transmitter. Something to do with the emotions of the subject, and being able to tie her reactions into the villages alarm system or something. That much I was able to gleen from a nurse who had been assisting the doctor at the hospital during one of her experiments.
And the act of wanton vandalism? Well it was taxi driver No.10 who told me that someone wearing a black piped blazer was seen breaking the aerial off her taxi. And the only person I know to wear such a piped blazer is none other than .... here what do you think your game is, give me back that notebook...........
Well that's all I can remember up to the time when I was accosted by two large men, or thugs you might call them. One of whom, in a bright red jersey with a big bushy beard asked me for my notebook. When I didn't give it to him he said I had better or something nasty would happen to me. I was just about to protest and remind him of the power and freedom of the press when he hit me. When I came round I was lying on the tiled patio of the cafe, my note book had gone. Upon returning to the news office of The Tally Ho , where I am currently typing up this article, I found that a message had been left for me. That I was to report to the Town Hall where No.2 would be waiting to see me.
I hope this will not be my final story, it appears that No.2 is not too keen on "Investigative journalism."