A Right Pair Of Gun Runners! 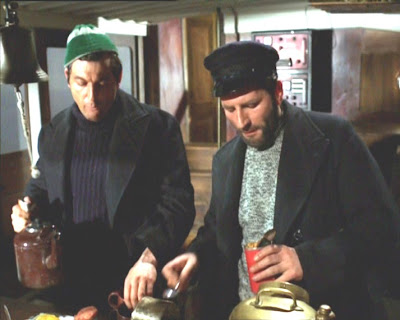 This is Ernst and Gunther in the wheelhouse aboard their launch, a more hardened pair of gun-runners you are less likely to meet - or are you?

True, they did come across the sea going raft with an unconscious man lying aboard it, the man who was unceremoniously dumped into the sea! His raft plundered, and then would have been left for dead, had it not been for Gunther.
For some reason there seemed to be a delay from the moment the raft was cut adrift for the launch to get underway again, as the engines were gunned, then growled, possibly sending a signal to the man floating in the water astern, and giving the man time to grab hold and clamber aboard! If this is correct it seems hardly the action of two hardened gun-runners. It is just possible that there is more to these two seafaring men, than first meets the eye, as they happily tuck into tins of cold Village baked beans and corned beef, tea, and tinned pears, sorry Pineapple chunks! It would appear that they had run out of their own vitals, so keen as they are to tuck into the Prisoner’s provisions! 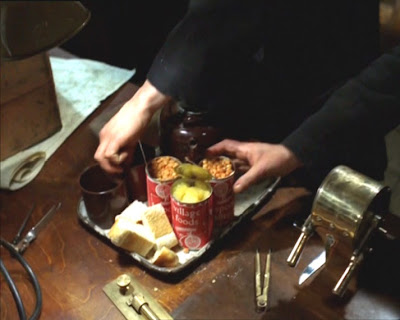 If it is the case that these two men are simple gun runners, it strikes me that they cannot be making a great deal of money out of it. Because in that crate are two or three German sub-machine guns, a mortar launcher, and other bits and pieces, all thrown together in a crate. The weapons would be racked, even greased and wrapped in greased paper had they been new weapons. These are definitely second-hand weapons! 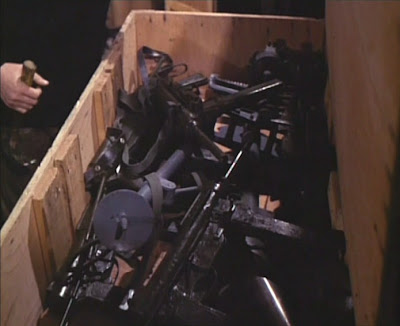 However on the other hand, it is possible that being a pair of gun runners was simply a cover in case what happened at sea, happened. That they had been shadowing the Prisoner aboard his sea-going raft since he cast off at the Village, Ernst and Gunther being agents for the Village. That it was their task to maintain a shadow over the Prisoner, and come to his aid if he gets into trouble, as he did, and as they did. And so as the Prisoner clambers aboard he makes a search of the launch, and finds what he is intended to find, a crate of weapons, and arrives at the conclusion he did. That he was aboard a gun-runners boat!
But I find this improbable, as the boat and her crew just so happened to be in the right place and at the right time. They gave the Prisoner time to get aboard their launch, before getting underway again. They didn't turn a hair when tucking into the Prisoner’s provisions, unless those tins of village food were already aboard.
Oh yes, the deliberate act of dumping the unconscious body into the sea, is what would be expected of gun-runners. But then we come back to that slight delay in getting the launch underway. If there had not been that slight delay, which was enough for the prisoner, he would have been left to drown at sea.

Your own reporter.
Pictures from the Department of Visual Records.
Posted by David Stimpson at 07:24