The Frankenstein Syndrome
In creating ‘the Prisoner,’ did Patrick McGoohan create a monster which eventually got out of control? When I say out of control, I mean it's fans have played their part, after all so much has been read into the Prisoner series, so many theories and ideas going down so many different avenues over the many years, as I have myself, so guilty as charged. And all McGoohan wanted was to make us stop and think, to ask questions, but I think that's where it all got out of control, For McGoohan anyway.

Fall Out Was An Escape?
Well that's what it seems to appear to be for many. But for Sir, it was a case of being just as much a prisoner at the end as he was at the beginning, which of course ‘Fall Out’ was.
For the ex-No.2, well he went back to another kind of Village, that of the political , even if it was through the Peers entrance of the Houses of Parliament. As for No.48, well he is probably still out there, somewhere along the A20 trying to thumb a lift to somewhere or other!
The Village was being evacuated, upon the order of the President. So where would all those citizens go? Who would look after those old folk, those in the hospital who have been medically experimented upon, where would they go? And those citizens born in the village, what would life be like for them outside of the Village? But we need not concern ourselves too much about their predicament, because they'll be back in the village before you know it. Look how fast the returned after his entering , and having packed his new masters bags for him! Well it was the , and two suitcases had been packed by the Prisoners return to his house in the opening sequence! 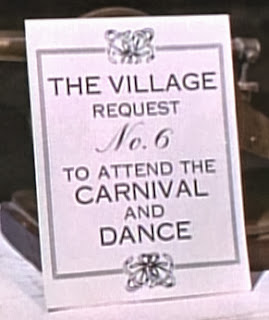 Considering the title of this episode ‘Dance of the Dead, would you go? I don't think I care for it somehow. I like a party, but somehow there seems to be something dark and dangerous about this invitation, don't you think?

It’s Inexplicable
As to why anyone should be forced to wear these tinted visors!


Are they to protect the citizens faces from the effects of the sun? If so the Village was once again ahead of it's time as regarding the dangerous effects of ultra violet rays!