He Brews His Brew And Plays With His Chalk

And that is about all anyone can say about this somewhat obscure chemist. 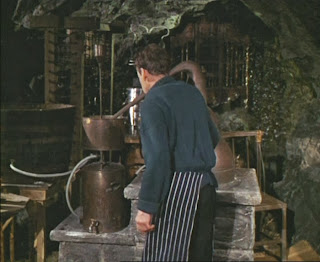 He could be a prisoner, who like No.6 wears no numbered penny farthing badge. Forced to spend his days living like a hermit in a cave, brewing his brew, and playing with his chalk in scientific formulae. These formulae are then photographed, and the blackboard cleaned up, which requires him to commence his labours on another formula. 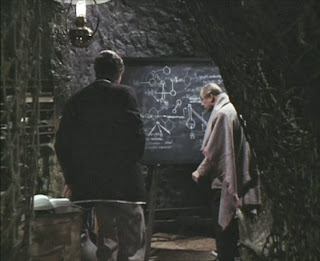 The physicist seems to live on the fringes of the village, leading, as is suggested, perhaps happy living the existence of a hermit. As long as they leave him alone, he's not too bothered.
However having said that, he seems willing enough to work with No.2, possibly following his instructions, to concoct a potion to use on No.6. The proportions of which are exact to carry No.6 through to the end of the elections, which could mean that the "Therapy Zone" is simply for No.6's benefit, and that this chemist  doesn't live the life of a hermit, on the fringes of the Village at all!