A Favourite Scene In Checkmate 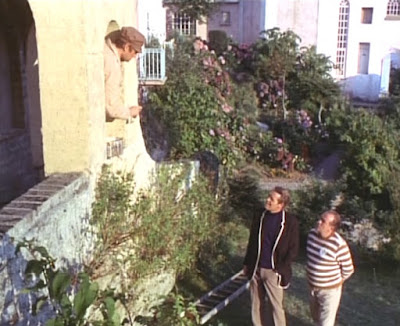 When Number 6, having recruited Number 53, the Rook, as one of his reliable men they approach Number 42 who is busy painting a wall. Number 6 puts on an air of authority and asks Number 53 what he thinks. Number 42 sees the two men below and asks if there’s something wrong. Number 6 asks him if he painted this wall. That’s a stupid question seeing that Number 42 has a paintbrush in his hand! But the painter said that if its not satisfactory he’d paint it again. But both Number 6 and Number 53 are satisfied and tell Number 42 to carry on and that they’d be in touch with him. But clearly someone wasn’t satisfied with how 42 had painted that wall. Because the next day when Number 6 goes about The Village alerting his reliable men with the code phrase “Rook to Queen’s pawn six check,” Number 42 is still painting that same wall!
But going back to this scene, when Number 6 and Number 53 approach Number 42 who is busy painting a wall, you can plainly hear the words “You up there Fred?” and the reply comes “Yes.” So the first and immediate question came, who’s Fred? And who was shouting after him? And secondly, Patrick McGoohan could not have failed to hear the shout, thus spoiling the scene, so why didn’t he have the filming of the scene cut, and go for another take?