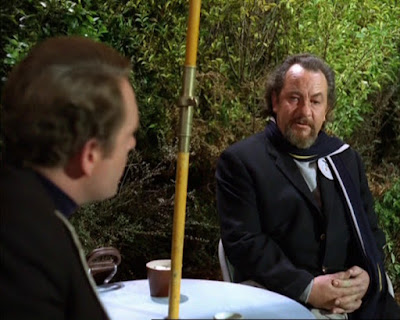 Number 6 is, as far as we know, the only citizen in The Village to concern himself about Number1, perhaps unlike Number 2 he’s not an optimist!
“I am definitely an optimist” Number 2 tells Number 6, “That’s why it doesn’t matter who Number One is. It doesn’t matter which side runs The Village.”
These are two fundamental questions to Number 6. But the two men do have something in common, they both know too much, that they are both lifers. Number 6 is obviously staying, while Number 2 is allowed to leave The Village although the one is just as much a prisoner as the other. Because there is more than one way of being a life prisoner of The Village beyond The Village itself. In this Number 2 is not alone, there is also the Colonel and Fotheringay to name but two, as well as Cobb in ‘Arrival.’