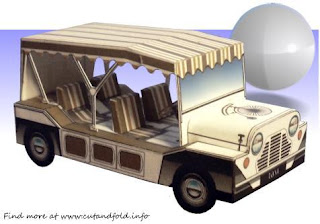 It had to be, a fleet of four Mini-Mokes used in The Village as taxis, which I had decided to replicate via four cardboard cut-outs of the Mini-Moke and is pictured here

http://www.papercraftsquare.com/1965-prisoner-morris-mini-moke-free-vehicle-paper-model-download.html
I assembled the required tools, a pair of scissors and a knife {tools which I’m informed were outside the pale of the law} together with a six inch ruler, a pot of glue, a few cotton buds, and the cardboard sheet itself, containing the cardboard cut-out. Carefully I scored all the folded lines and glue tabs using the back of the knife and ruler. Then I carefully cut out the first section of, and folded it giving me the front and side panelling of the Mini-Moke. Then I cut out the bonnet section, folding and gluing the glue tabs. It was a delicate operation due to the smallness of the glue tabs, hence the need for cotton buds with which to apply the glue. The bonnet section was then set to one side in order to allow the glue to set. My attention was then directed to the interior and back section of the Mini-Moke, which I cut out, and having folded the glue tabs I tested the fitting together of this section to that of the front and side panelling section. They fitted together perfectly, and I held in my hand the first semblance of a Village taxi. So using a cotton bud I applied glue to the tabs and stuck the two sections together and set the two sections to one side in order for the glue to set. Although I have to say it wasn’t easy gluing the sections, due to the small size of the glue tabs, but then they are in keeping with the scale of the model. Next up was to glue the bonnet section to the already assembled section. Here I soon hit a snag. I attempted to fit the bonnet section to the rest of the assembled section before gluing into place. However the size of bonnet section wasn’t in keeping with the scale of the rest of the model! No matter how I tried I couldn’t fit the bonnet to the space provided between the front grill and where the windscreen section would fit. The bonnet section has a depth of 15mm, whereas the relating section to which it is to be glued is only 12mm. So three mm covered the footwell and steering wheel area of the model, and there was no way I could make the bonnet section fit. I did think to reduce the scale of the bonnet section to make it fit via photocopying it, but that would have made the glue tabs far too small! The only other way would be to enlarge the scale of the rest of the Mini-Moke by photocopying to make the bonnet fit. However having attempted that three times and not being able to enlarge the rest of the Mini-Moke to that of the bonnet section I gave it up as a bad job! As Number 22 once said “Well it was worth a try Number Two!” I don’t know if the creator of this cut-out model of The Village Mini-Moke is aware of this fault or not. However I should have expected him to have actually made the model himself, or at least to check his figures when he was measuring out the model at the planning stage. I did think the fault was mine, but try as I might there is no way I could make the bonnet section fit the engine section of the Mini-Moke. So the sections remain separate on my desk, and likely to remain so until I throw them into the wastepaper basket! 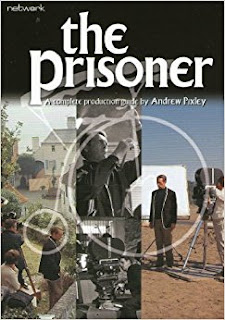 On the collecting front, I happened into the local Cancer Research charity shop. And whilst perusing the book shelves I found a copy of the book {picture on the left} by Andrew Pixley for the princely sum of £1.30p. The book published in 2008 is a second print {reset} of the book published in 2007 which made up part of the 7 DVD disc set for the 40th anniversary of ‘the Prisoner.’ The book is clean and looks to have been unread. I’m presuming that this book made up the 6 disc Blu-ray DVD box set, or the 6 disc DVD box set, as it’s a slightly different size to the one I have in the 40th anniversary DVD box set. It would seem that having bought the 6 disc box set, for some reason the purchaser didn’t want the book, only the discs, and decided to donate the book to the charity shop. I was only too happy to give it a new home within my collection, where it is appreciated.