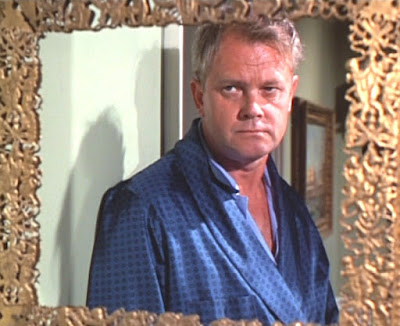 After 50 years of ‘the Prisoner’ there are still a number of uncertainties. For example, I cannot make up my mind whether or not ZM73 actually recognized the face staring back at him out of the hall mirror, the Colonel’s. Certainly the Colonel’s rank was only mentioned by Number 2, once at the outset of the episode, and again at the end when he realized he had been outmanoeuvred. So at this point of the episode there is no way for ZM73 could know who the man is staring back at him, unless he knows the Colonel through his previous employment. Is that why ZM73 put his fist in the mirror, symbolically punching the Colonel in the face. Because he realized he had been betrayed by his own side once again? Or perhaps it was simply through anger, due to the current situation he finds himself in.