This Evening I Am Mostly Watching Checkmate 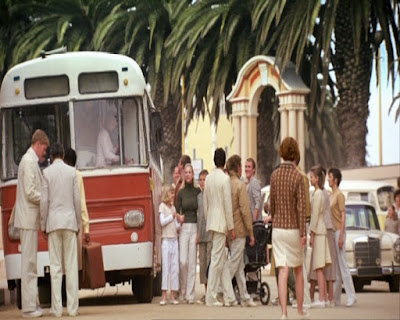 Checkmate – The Village is expanding as newcomers arrive. Six asks a woman where they've come from? "We just got off the bus." Six asks where she got on the bus? "The Village" the young woman replies. Six informers her that this is The Village, they've arrived. "Isn't that just the wildest thing?" 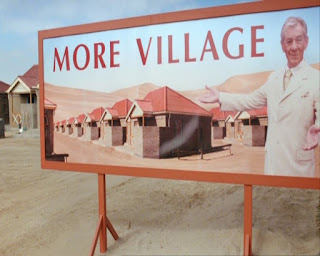 More Village means that our way of life is becoming the very conscience of the universe. 2 exaggerates of course, but only slightly.
More Village means The Village is expanding with newcomers arriving by bus. But from where do all the newcomers to The Village come?
“What do you think kids? Isn’t it beautiful? Where do you think the clinic is? That’s where Two will be.”
Six approaches a young woman with her two children who have just got off the bus.
“Who are you people?”
“Newcomers” the woman tells him.
“So where have you come from?” Six asks her.
“We just got off the bus.”
“Where did you get on the bus?”
“Well the Village.”
“No, this is the Village. You've arrived.'”
“'Well isn't that just the wildest thing” the woman laughs.
More Village, as Two informs us, means that the way of life in The Village is becoming the very consciousness of the universe. He exaggerates, but only slightly.
Six isn't at all well. He received an appointment at the Clinic from the postman, who didn't ask Six to sign his number! He appears to be dying, and confronts Two on a building site.
“What’s this?” he asks Two, holding out his Clinic appointment card.
“Is it perhaps your certificate of dying?”
“Why now? You could have killed me a thousand times.”
“I’ve tried every way I know to help you belong, but you still refuse. You choose. This life….or no life.”
“Assimilate or die.”
“That is the great gift of Village death, clarity of choice.”
The newcomers are good people. Look at them. They choose life. But you…..Six swears he’ll find a way out before he dies. But Two feels sorry for Six, and so gives him the very secret of life…….breathe in…..breathe out…..more Village! Two will watch Six die…one breath at a time, Six. One tick of the clock at a time, tic tic, tic tic!
But Six doesn’t die, he is the answer to the future of The Village. Because as more and more holes open up, The Village being in danger of slipping into oblivion 147 can see that Six is the one, “We want Six, Six is the one. We want Six, Six is the one.” However back in ‘Anvil’ when a schoolgirl, 1,100, has something to say about One, when asked the oldest question in Village history, who is Number 1? She replies “There is no Number One, and there never has been and there never will be. The concept of the number Two is an act of humility. The title reminds us all that we are all pubic servants, even Number Two. No-one is Number One.” So perhaps 1,100 got it wrong, that Six is the first Number 1, seeing as he’s the one. Because Number 1 is the boss, and while Six sits in the sand with 313, dreaming of doing it the right way, to make a good Village. He thinks he could do it. He thinks he has to try, with the help of 313, whatever the cost. 313 sheds a tear because it’s her counterpart, Sarah in New York who will have to dream The Village. Sarah has mental problems, because she was abused as a child. So is 313 shedding a tear for herself, or for Six, or The Village that is to come? Because his hopes of making a better Village will be dashed because of the mental material he will have to work with in Sarah’s subconscious!
And so another screening of this series comes to an end all too soon. I’m always left with the feeling of wanting more…….More Village! Well I can always put the DVD discs into the machine again!