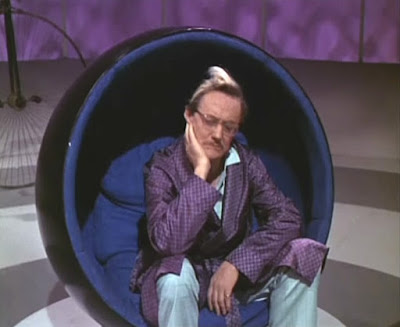 If it was thought that it was Number 6 who had had a disturbed night after having been taken to the laboratory that first time in order to sleep his dream about ‘A’, then what about Number 2 here? He looks to have had a bad night as well, and why not? After all things are not going according to plan. Three days that’s all he has, and two of them have passed by already without coming even close to discovering the reason behind the Prisoner’s resignation. The man’s under pressure, he gave Number 1 his word, within three days he said, and he’s but one chance left! But for the time being he has a day’s administration to do.
Having risen up through the floor in that chair indicates that Number 2’s quarters are underground. Or possibly a room in the Town Hall, and not actually part of the Green Dome, which is merely his office, and not an actual residence. It might be on the cards that Number 2 lives in that elaborately furnished room we see Number 2 going into during the episode of ‘Dance of The Dead, only the room would be expected to be differently decorated for this particular Number 2, as well as for his predecessors and successors. If that is the case, and even if it isn’t, for such a man in Number 2’s position he lives in far less comfortable quarters than many, if not all the residents in The Village, prisoners or warders alike. But then it might be imagined that Number 2 isn’t in The Village for the good of his or her own comfort, but simply to do a job. It wouldn’t do to make Number 2 too comfortable, after all one never knows when he or she might be leaving!