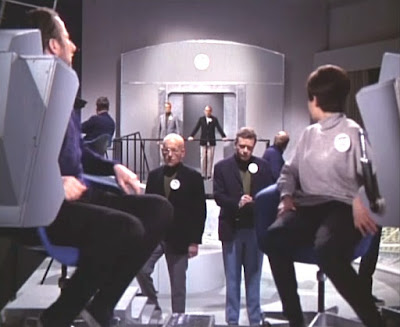 Going on Number 2? Well to begin with, you’re disrupting the work of the Observers, seeing as you’ve managed to turn everyone’s head away from their monitors! The Supervisor-Number 26 who is the most capable of the Supervisors appears to have been given an assistant, Number 60. But the trouble is, the Supervisor who also acts as a radio DJ made a mistake, he read out a bogus birthday greeting for Number 6, when it wasn’t even his birthday. But how was the Supervisor to have known that? He simply read out over the public address system what was put before him. And for that you finished him, and promoted Number 60 to the position of Supervisor. If Number 60 hadn’t been second to the Supervisor in the first place, you wouldn’t have been able to do that. You wouldn’t have been able to relieve Number 26 from his position because there wouldn’t have been anyone for you to promote in his place!
So what’s going on here Number 2? Misunderstanding, trickery, contrivance, mismanagement on your part! There are no enemies in your midst, only the ones you create yourself, but much more than that there is no conspiracy against you or The Village. You are the unwitting subject of acts of jamming, that’s what’s been going on and will continue to go one. What’s more since you refused Number 1’s offer of further assistance, you’ve been hung out to dry!