I was talking with an old friend a couple of weeks ago, and we were chatting about things ‘Prisoner,’ when he made the comment about the helicopter seen taking off outside the ‘The Schizoid Man.’ 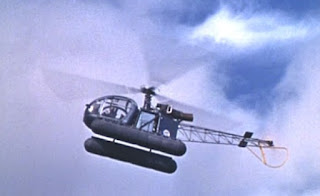 I congratulated him upon his observation, but said he had failed to observe that these are two different helicopters! It’s a pity that this scene was spoilt by the use of sock film footage of F-BNKZ which was filmed at Portmeirion, when they should have filmed more footage of the helicopter F-BOEH at MGM film studios at Elstree Borehamwood than they did, and could have done.

Be seeing you
Posted by David Stimpson at 07:21