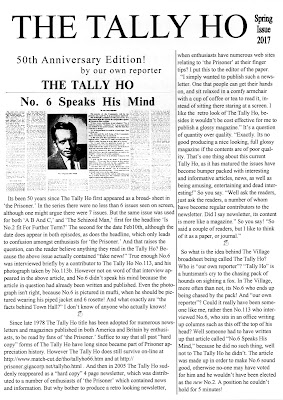 This particular “imprint” of The Tally Ho has now reached its 50th anniversary with this, its 50th  issue. I say imprint because there have long since been other such Tally Ho magazines and newsletters over the years. It’s really quite remarkable that The Tally Ho has survived for so long, because when I published the first four page issue, never did I think the paper would evolve into the paper it has become. Nor could I have envisaged how popular the paper would turn out to be amongst enthusiasts for ‘the Prisoner,’ especially when taking the Internet into consideration. That is part of the reason why I originally published The Tally Ho in its “retro” format, also the fact that readers would be able to hold it in their hands. During the late 70’s and  even into the mid 1990’s such newsletters and magazines were being published by ‘Prisoner’ enthusiasts in ‘Prisoner’ local groups of Six of One the length and breath of Britain. Today I believe The Tally Ho is the last of its kind to be published. Yes its several sheets of paper simply stapled together, but it’s the content that matters. You can produce a wonderful looking glossy magazine, but if there’s nothing of interest in it…
Another reason for originally producing The Tally Ho was simply because I wanted to do something in connection to ‘the Prisoner.’ So who were the original recipients of the newsletter? I merely sent copies out to friends four times a year, and still do so today, while other readers have become firm friends through receiving The Tally Ho. But isn’t the title of the newsletter a little obvious? Well it’s in keeping with the name of The Village broadsheet, although I did toy with the titles of ‘Village Weekly,’ ‘Village Mercury,’ and ‘Tally Ho Journal,’ all of which can be seen in the episodes ‘Arrival,’ ‘Hammer Into Anvil,’ and ‘It’s Your  Funeral.’ Obviously ‘Village Weekly’ wasn’t right as there was no way I could publish the newsletter on a weekly basis, I almost chose ‘Tally Ho Journal’ for the title, and I do still like it. So what did the first issue I published look like? Well the readers of that issue, who have remained faithful to The Tally Ho will know, and may have retained each issue since. But for readers who are more recent to the paper I have reproduced it on the  following four pages. I had to photocopy it from the original paper, because I did not bother to keep copies of the early issues on disc, as I didn’t think the paper would gain new readers, or that a “back number service” of previous issues would ever be required. Yes the issue is naïve, there’s a good deal of “white space” as I call it, and the pictures could have been larger, but I had never produced a newsletter before and had to start somewhere. And at the time when the first issue went to print the printer was playing up, hence green being the dominant colour in the pictures! But it was topical in one respect in at the time Prime Minister Tony Blair called for “Increased Vigilance Call!” That I thought to be very Villagesque! Also readers who attended this years Prisoner Convention held at Portmeirion can compare it to the report of the 2005 Convention. In fact some readers of The Tally Ho will have been there, but perhaps not read that particular brief report!
At the same time I started producing The Tally Ho, being a fan of ‘Danger Man,’ for a short time I published ‘The Jolly Roger” which only ran for a few issues, because as well as The Tally Ho, I was working on two manuscripts regarding ‘the Prisoner,’ and carrying out a good deal of research at the same time, and so it became a question of time. So something had to give, and that was ‘The Jolly Roger!’
So what of the future for The Tally Ho? Well as long as there are enthusiasts of ‘the Prisoner’ out there who want to read it, and as long as I am inspired to do so, it will be my pleasure to keep publishing the paper on a quarterly basis. I have to admit that in the beginning it was a struggle because I was producing all the content myself. It was my dream that readers themselves would make contributions to the paper, it took several years to achieve that. The paper has come a long way since that first issue, having grown in both size and reputation. And now a number of readers send in their contributions which I always enjoy reading, as well as publish. Only once did I refuse to publish an item, on the grounds I found it to be completely inappropriate, and libellous! I always try my best to encourage people to contribute to the Tally Ho. Firstly as the editor it makes my task that much easier, and secondly I know that people have interesting and fascinating things to write about ‘the Prisoner,’ which other people enjoy reading, but who perhaps do not necessarily feel the need to respond to {that can be frustrating in some quarters} or even to contribute themselves. So there it is, The Tally Ho, a brief history of the paper in its current format enjoyed by a modest readership which has fluctuated over the years. Well some people became no longer interested in either the newsletter or ‘the Prisoner’ itself!

Readers will have observed a change with this issue in that the Village font type is only used on four pages, that is because those pages had been printed before I took the decision to change the font to Times New Roman which is the correct font type for The Tally Ho, or Bookman Old Style in a couple of cases according to space used on a page. I am guilty of liking, and using the Village font too much. But it was wrong for The Tally Ho, and I knew it was wrong. However when I was writing the front page story and added the image of The Tally Ho half page, the type for the paper was blatantly obviously wrong, hence the change.
Of course it’s said that the print font for The Village is Alberta with a modified ‘e’ and that is reflected on sign posts and wall posters around The Village, and yet that font is not used for The Tally Ho. Even the numbers on the badges worn in The Village are not Alberta, not even “Village font,” but FUTURA BOOK!


Be seeing you
Posted by David Stimpson at 08:17