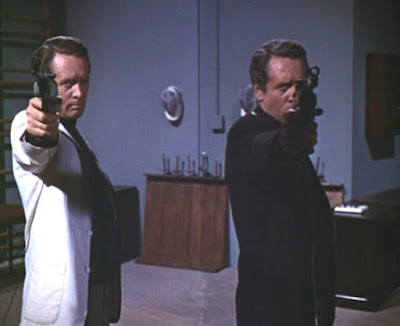 Tonight on ‘True Entertainment’ at ten o’clock I can watch ‘The Schizoid Man,’ I grant you there’s nothing unusual in that. However, I shall also be watching ‘The Schizoid Man’ along with ‘The General’ on Sunday as ‘True Entrainment’ continues their second screening of ‘the Prisoner.’
It’s rather a novelty really, to be able to watch a live television screening the same episode within three days, but the third screening of the episode before the second. Its rather like ‘The Schizoid Man,’ one can be either, the other way round, or simply both.

Be watching The Schizoid Man – Be seeing you
Posted by David Stimpson at 08:15