50th Anniversary Edition!
by our own reporter 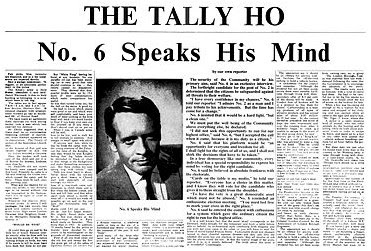 Its been 50 years since The Tally Ho first appeared as a broad- sheet in ‘the Prisoner.’ In the series there were no less than 6 issues seen on screen, although one might argue there were 7 issues. But the same issue was used for both ‘A B And C,’ and ‘The Schizoid Man,’ first for the headline ‘Is No.2 fit For Further Term?’ The second for the date Feb10th, although the date does appear in both episodes, as does the headline, which only leads to confusion amongst enthusiasts for ‘the Prisoner.’ And that raises the question, can the reader believe anything they read in the Tally Ho? Because the above issue actually contained “fake news!” True enough No.6 was interviewed briefly by a contributor to The Tally Ho No.113, and his photograph taken by No.113b. However not on word of that interview appeared in the above article, and No.6 didn’t speak his mind because the article in question had already been written and published. Even the photograph isn't right, because No.6 is pictured in mufti, when he should be pictured wearing his piped jacket and 6 rosette! And what exactly are “the facts behind Town Hall?” I don’t know of anyone who actually knows!
Since late 1978 The Tally Ho title has been adopted for numerous newsletters and magazines published in both America and Britain by enthusiasts, to be read by fans of ‘the Prisoner.’ Suffice to say that all past “hard copy” forms of The Tally Ho have long since became part of Prisoner appreciation history. However The Tally Ho does still survive on-line at http://www.match-cut.de/tho/tallyho66.htm and at http://prisoner.gigacorp.net/tallyho.html . And then in 2005 The Tally Ho suddenly reappeared as a “hard copy” 4 page newsletter, which was distributed to a number of enthusiasts of ‘the Prisoner’ which contained news and information. But why bother to produce a retro looking newsletter, when enthusiasts have numerous web sites relating to ‘the Prisoner’ at their finger tips? I put this to the editor of the paper.
“I simply wanted to publish such a newsletter. One that people can get their hands on, and sit relaxed in a comfy armchair with a cup of coffee or tea to read it, instead of sitting there staring at a screen. I like the  retro look of The Tally Ho, besides it wouldn’t be cost effective for me to publish a glossy magazine.” It’s a question of quantity over quality. “Exactly. Its no good producing a nice looking, full glossy magazine if the contents are of poor quality. That’s one thing about this current Tally Ho, as it has matured the issues have become bumper packed with interesting and informative articles, news, as well as being amusing, entertaining and dead interesting!” So you say. “Well ask the readers, just ask the readers, a number of whom have become regular contributors to the newsletter. Did I say newsletter, its content is more like a magazine.” So you say! “So said a couple of readers, but I like to think of it as a paper, or journal.”
So what is the idea behind The Village broadsheet being called The Tally Ho? Who is “our own reporter”? “Tally Ho” is a huntsman's cry to the chasing pack of hounds on sighting a fox. In The Village, more often than not, its No.6 who ends up being chased by the pack! And “our own reporter”? Could it really have been someone like me, rather then No.113 who interviewed No.6, who sits in an office writing up columns such as this off the top of his head? Well someone had to have written up that article called “No.6 Speaks His Mind,” because he did no such thing, well not to The Tally Ho he didn’t. The article was made up in order to make No.6 sound good, otherwise no-one may have voted for him and he wouldn’t have been elected as the new No.2. A position he couldn’t hold for 5 minutes!