It might be imagined that I have given up on THEPRIS6NER, but nothing could be further from the truth. It’s true enough that I’ve not put finger to keyboard to write about the second series, but that’s simply on the grounds that there is less material to work with than there is with the first series, not even 50 minutes per episode! And yet with THEPRIS6NER less is more, more Village!

2017 is the 7th anniversary of the British screening of the series, 8 years since its American premier event in New York in 2009. And to celebrate, this April my wife and I screened the series as we do each year. And still today at the end of each episode I’m left wanting More Village, and at the end I want to sit watching it all over again. So I am as much a devoted fan of THEPRIS6NER as I was when I first watched the series back in 2010. In fact I became a fan through watching the ITV previews of the series. Somehow it was just as I imagined it would be. Not filmed in Portmeirion? So what, I personally was prepared for that! No Patrick McGoohan, well there might have been had Ian McKellen not been cast in the role of Two. Because that’s the role Patrick McGoohan wanted. Then what might the critics of the series have had to say? But there is 93, a representation of the former Number 6 played by John White. Or is he the former 93 from ‘A Change of Mind?’ No, Number 6 surely, seeing as he’s the only one who wears that dark jacket with off-white piping like Number 6 in the first series. What it would be for Number 6 to one night go to sleep in his cottage, only to wake up in a strange apartment, although rather reminiscent of his cottage in the original Village, but in a completely unknown and alien Village and find he’s now 93. Its enough to turn a sane man to drink! But why is he there? Certainly not for Two to simply go on asking the question why did he resign? People, in their subconscious are brought to The Village to be made better. Number 6 isn’t mad, well not according to his record. He does appear to suffer from an anguish pattern, that was the doctor-Number 14’s diagnosis in ‘A B And C.’ But 43 years in The Village couldn’t have helped!!!! Certainly there were no alcohol in the original Village, unlike The Village of the second series in which 93 is described as the town drunk, and in one scene 11-12 is seen to be quietly getting drunk in the ‘Go-Inside’ bar. 93 dies in a cave, and thereby escaping The Village, because death is the only escape, and that is true of both Villages. So 93, an old man, a representation of Number 6 died in a cave somewhere out in the desert. He escaped, and yet he’s still a prisoner in the original Village. I’d love to be a fly on the wall when Number 6 went to the Green Dome to confront Number 2 about this other place, this other Village. But I suppose that would all depend on whether or not Number 6 had memory of the other Village! And I know, perhaps I shouldn’t be mixing the two series, that’s what the purist fan would say. But perhaps I’m no longer the purist fan of ‘the Prisoner’ I once was. 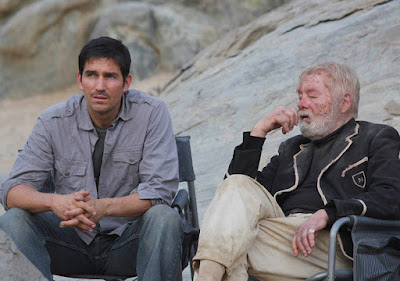 “Tell me now, who am I?”
“You’re Number 6.”
“I thought you were Number Six.”
“I’m just Six.”
“We can’t have two Number 6’s!”
“Why not?”
“It says Ninety-three on my jacket.”
“You represent the former Number 6.”
“Really.”
“Well no-one else in The Village wears a jacket like that, so you must be.”
“I’m unique!”
“So unique that you are the only citizen of The Village to be brought here from The Village!”
“The Village being the “other place.”
“I suppose so.”
“Like that woman, one of the newcomers, she just got off the bus in The Village, but said she got on the bus in The Village. But this is The Village, she and her children had just arrived!”
“That’s because there is only The Village.”
“You are not from here.”
“I don’t even know how I got to this place.”
“You are a bloody miracle!”

Breath in Breath out more Village
Be seeing you
Posted by David Stimpson at 07:51