A Favourite Scene In Arrival 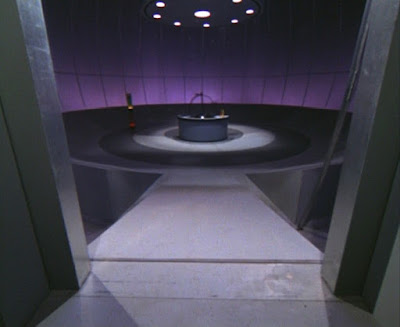 The foyer of the Green Dome is elegant, both traditionally decorated and furnished for the time. And yet in contrast, through the pair of French doors, and through the pair of steel doors beyond is a minimalist, futuristic looking office. The pair of steel doors are made from solid steel, the thickness of the doors indicates that they are probably blast-proof.
The Prisoner doesn’t know what to expect as the steel doors slide open to reveal a large purple walled chamber, and rising up through the floor behind a curved desk is what appears to be a large black sphere. If the Prisoner doesn’t quite know what to expect, the same can be said of the television viewer…the first time. The sphere turns, and turns out to be a chair, and sitting in that chair is a man. The Prisoner steps through into the office, the steel doors sliding closed behind him. The Prisoner is now under the spotlight, and Number 2 cannot help himself but show off the futuristic technology, and with the tip of his shooting stick umbrella he presses a button on the control panel of his desk. Set in the floor a disc drops and slides under the floor revealing a hole, through which a leather chair rises. Number 2 laughs, apparently he can never resist that. Perhaps he has demonstrated that with other such new arrivals. The Prisoner remains calm, unmoved, and unimpressed. He refuses the offer to sit down, and the offer of a working breakfast. The Prisoner is business-like and wants to know what it’s all about. Another chair rises up through another hole in the floor, if only the Prisoner would sit down, Number 2 will tell him.
Although the chamber/office is futuristic in appearance, there is still a place for something from past times, a high bicycle or to give it its nickname, a Penny Farthing, which turns out to be the emblem or logo of The Village.

Footnote: The first automatic doors used by people were invented in 1954 by Lew Hewitt and Dee Horton; the first one was installed in 1960. Apparently the idea came to them in the mid-1950's, when they saw that existing swing doors had difficulty operating in the high winds of Corpus Christi, Texas.