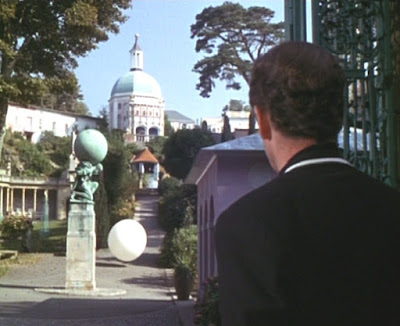 What’s the Guardian doing there? Number 6 isn’t about to make a run for it, that comes later. Perhaps it’s there to make sure Number 6 goes into the Town Hall, why shouldn’t he? After all he has an appointment with Number 2 to witness the dissolution of the out-going council. But why should the Town Council be dissolved? After all when a British Government changes, the Civil Service remains the same, members of the Civil Service work for whichever Government is in power at the time. I should have thought that was the same even in The Village, Number 2 might change, but the members of the Town Council remain the same. Besides do we actually witness the dissolution of the Council? True the final resolution of this council is a vote of thanks to Number 6, it is carried unanimously, and there is no further business at this time. Number 6 is allowed to question the members of the Council, not that they even attempt to answer his questions, it’s no wonder Number 6 described them as a bunch of tailors dummies! And yet perhaps they are what they are supposed to appear to be. The election was a manipulation of Number 6, aided by his own predictability. So no election, perhaps no Town Council, and yet Number 6 must have believed in the democratic process, as he explained to the Colonel in ‘Many Happy Returns’ that he could have been a member of the Town Council, it being elected once a year. But is that the same Town Council as witnessed in ‘Free For All? If it is I cannot somehow see Number 6 being a willing candidate to become one of those brainwashed imbeciles as he called them. It also strikes that by the time of ‘Many Happy Returns’ Number 6 has changed his mind about the Town Council, he seems “matter of fact” about it, almost casual as he explains it to the Colonel, as though it’s no longer something dark. But perhaps that’s because Number 6 thinks he’s well out of the way of The Village, and can now afford to be blasé  about it. If that’s the case, his predictability is once again to be his downfall, as he is about to be placed in the hands of his tormentors once again!