Earl Cameron At 99 - One Run Short of His Century! 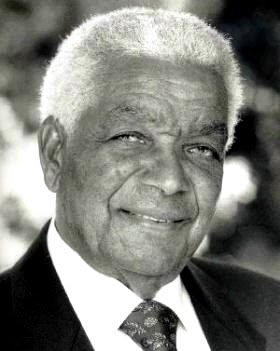 At 99 years of age today, Earl is probably the oldest living actor to have appeared in ‘the Prisoner. In the main it’s Peter Swanwick who plays role of the day-time supervisor, with occasional other actors drafted in from time to time to play various supervisors at both day and night time. Such is the case with Earl as the Supervisor-Number 106, who in his two appearances in ‘The Schizoid Man’ is both the day-time and night-time supervisor.
In both 1992 and1997 Earl Cameron was amongst the special guests attending both the 25th and 30th anniversary events of ‘the Prisoner’ in London. In an interview Earl had this to say about ‘the Prisoner,’ “Well I think I only had about two or three days with this part at the studio. Apart from Patrick McGoohan I remember little. You go to a studio and if you have a big part you meet everybody. I remember Anton Rogers of course, I remember him very well.”
Here is a link to a ‘Historical Geographies’ a biography for Earl Cameron.