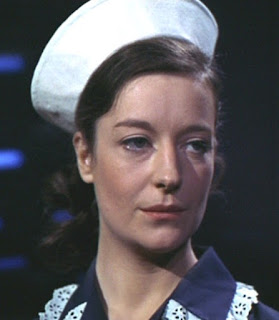 Whatever happened to Number 58? That delightful woman who speaks in some incomprehensible tongue. I know we could not understand one syllable she uttered, but there was something appealing about her, you couldn’t help but like her. Yes she irritated Number 6 because she couldn’t speak English, but had she been anyone else Number 6 would have been prejudiced against them. And after all, all Number 58 wanted to do was help Number 6. And it made her feel important, instead of being a mere maid. She was Number 6’s driver, to be by his side at all times, well most of the time. Mind you it must have been very difficult for Number 58 being in The Village and unable to speak English. But at least Number 2 was able to speak her language, so perhaps that wasn’t so bad for her. She was at Number 6’s side when he took over the inner sanctum of the Green Dome, having fun with him as they found out what all the buttons on the control panel of Number 2’s desk do. As well as answering the telephone! But then there came a sudden and dramatic change in Number 58, she was no longer the convivial housemaid, cheerful and friendly, but a cold hearted, unfeeling woman. Who promised Number 6 that what had taken place in ‘Free For All’ was but the beginning! Was really playing the role of Number 56 nothing more than that, an act? Was there no part of Number 58 inside this hard faced Number 2? If there was it was gone. Which is a pity, as I rather like the character of Number 58, she was quite pleasing in a way.

Be seeing you
Posted by David Stimpson at 11:44