They Always Do That! 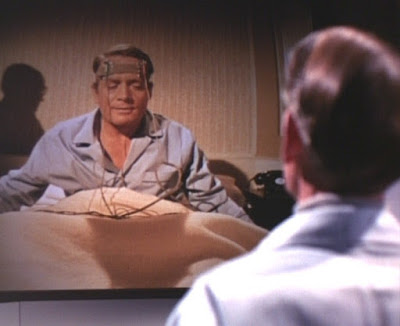 “Ah it’s going to work, I knew it would” the doctor exclaims watching Number 6 on the wall screen.
The doctor-Number 40 is confident his technique would work, just as Number 8 of ‘Living In Harmony’ was confident in his technique as it had always worked before, and judging by the doctors phrase “They always do that, don’t worry,” Number 6 is certainly not the first prisoner to undergo this technique to extract information. And it might have worked, however Number 6 was not like all the others, you cannot force information of out Number 6, he would have died first! Like Number 8 in ‘Living In Harmony,’ the doctor-Number 40 only attained previous success through this technique due to the poor quality of previous subjects!
Once again they came to Number 6 in the night, two male medics and a psychiatrist. The doctor-Number 21, who looks like the doctor-Number 40, checks that Number 6 had drunk his drugged nightcap, while another carried in electronic equipment on a stand, turned and left the cottage, leaving the other two to put leather straps around his wrists, and a larger one around his head which hold metal plates in place, to which electrodes are attached. It is unknown whether or not any drug is used. But the way Number 6 sits up in bed and waves his arms about in front of him “They always do that, don’t worry,” a drug might well have been used. It all depends on the effect the electrical connections have on the subject. How many times the doctor has achieved success with this technique is unknown, but presumably it always relies upon the use of a communications medium like Dutton. It cannot be easy to find such a communication medium each time, someone who knows the subject!
Be seeing you
Posted by David Stimpson at 08:22