Do You Remember Your First Day Number Six? 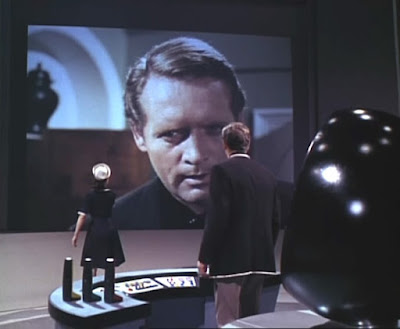 It would appear that while playing with the control panel on Number 2s desk, Number 6 and Number 58 have inadvertently tapped into the Bureau of Visual Records. Here Number 6 witnesses his own first day in The Village, about the time when the maid Number 66 is attempting to play on the Prisoner’s sympathies. Only he has no sympathy, not for anyone. His one single desire is for escape, and he’ll do anything and use anyone to achieve that aim.
If it wasn’t for Number 58 being in the chamber one could almost believe that it was Number 1 watching his alter ego’s first day in The Village. Perhaps Number 1 is watching, observing his alter ego with Number 58 in Number 2’s office. In allowing Number 6 a little freedom within the machine, allowing Number 6 a few minutes in order for him to enjoy his new found power. But ultimately Number 1 will not allow Number 6 to abuse that power. And so as 6 attempts to incite the citizens into a mass breakout of The Village, Number 2, the new Number 2, the former Number 58, takes back control from Number 6 who is reduced to the ranks after receiving some very rough treatment!