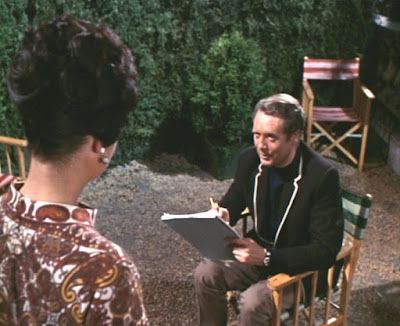 What was it Number 6 said “That’s the trouble, I can’t find anything at all!” That was during one of Madam Professor’s art seminars when she asked him if she could help him, thinking he was finding things a bit strange. Why Number 6 couldn’t find anything at all wasn’t for the lack of trying, after all a few moments later he was snooping about in Madam Professor’s house. And that’s the thing about Number 6, when he’s not trying to escape, he’s poking his nose into business which does not concern him. Mind you he had his nose rubbed in it when that announcement was made about a great new painting competition, the subject that time being seascapes. That was after Number 6 had realized his escape plan had failed!
It makes me wonder, if Number 6 had not involved himself with the General, would the educational experiment of Speedlearn not have gone on to be a successful experiment. But as it is, when that experiment came to an abrupt halt, did any of the students realize? If so what might their reaction have been, if any?