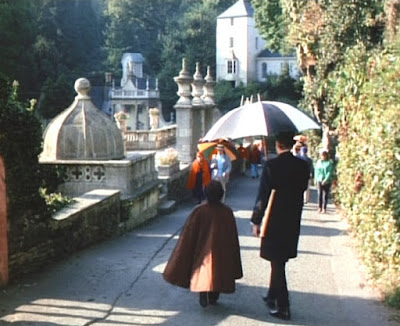 When the human chess match is preparing to start, the chess pieces taking their squares on the board. I enjoy the incidental music, and the Butler, seen here wearing his cape inside out, with an administrative official carrying a chessboard, as well as shading the Butler from the sun by carrying the open umbrella. While the Butler carries the box of chess pieces. This makes the Butler look far more important than his job as manservant to Number 2 would suggest. What is it about the Butler, in this instance, that warrants such a privilege, the need for him to be escorted by an administrative official? It has been suggested, in the past, that it’s the Butler who controls the moves in the human chess match. That he makes the moves first, and the players then follow the moves the Butler dictates. Yet this cannot be right, as the Butler follows the moves being made by the two chess players. The Butler is a student of chess, and likes to follow the moves on his own chessboard. But that doesn’t explain the administration official. Mind you, the Butler is there at the beginning of ‘Checkmate,’ and he’s there at the end, placing the white Queen’s pawn back on the chessboard. Is there something symbolically significant in that, or is it pure coincidence? If anyone would have put that pawn back on the chessboard, it would have been Number 2. Unless the Butler is Number 1, and in that case, perhaps it’s the Butler controlling the moves on the metaphorical chessboard that is The Village!

Be seeing you
Posted by David Stimpson at 11:45