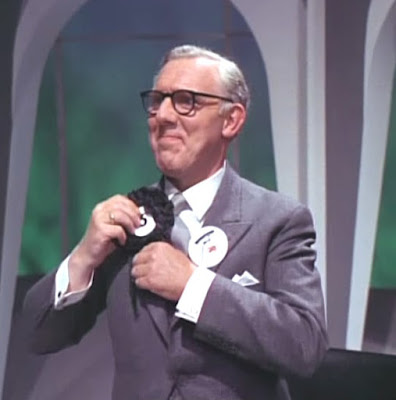 You’re not just the manager of the Labour Exchange are you, you’re much more than that. In my opinion you are a great improvement on your predecessor. He seemed more concerned with his child’s construction set. Number 6 dashed it to the floor, it was rather pathetic to see him scrambling on his hands and knees trying to put the pieces back as quickly as he could. All he had to do was to put the Prisoner through an aptitude test, and get him to fill in a simple questionnaire. The aptitude test was rigged, so it was only the question of filling in the questionnaire. If he will just fill in his race, religion, hobbies, what he likes to read, what he likes to eat. What he was, what he wants to be, any family illnesses, any politics? Mind you I don’t know why he had to bother really, after all Number 2 had a file on Number 6, he could get all he wanted from the file Number 2 left with him. Well it was a bit of a pointless exercise, seeing as Number 2 had all the information about Number 6 anyway. A little like you really, you had everything about the Prisoner written down in a ledger. You on the other hand are much more with it, capable I mean.
Number 6 came into your office suffering from a dizzy spell! You helped him up off the floor, and sat him in a chair. Then you faced him with the Truth Test, getting Number 6 to admit that if he won the election, and became the new Number 2, he would then organise a mass breakout. But then you knew that anyway, it seems Number 2 isn’t the only master of manipulation in The Village! Or is it that Number 6 is only too predictable? Just one other thing, you don’t have one of those files with plastic wallets on Number 6. You write everything down in a ledger. “Well I’m like that you see. We mustn’t get ahead of ourselves and forget the old ways, because sometimes the old ways are the best ways.”