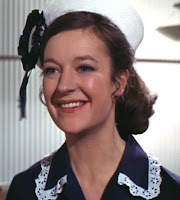 It might be reasonable for Number 2 to know the language spoken by Number 58, and so to speak it himself, as they appear to come from the same homeland. However it’s inexplicable how Number 6 is able to speak a phrase of the language! As for Number 2 and Number 6 speaking to Number 58 in English, perhaps its not so unreasonable for her to pick up a smattering of English, after all The Village might well be International, but the prime language spoken is English. What’s more all the Village signage is in English, not French, Polish or Czech. So really for anyone brought to The Village who cannot speak just a little English, and cannot read English, there’s very little hope for them to understand The Village or its community at all!
But of course its all a game, and Number 58 played her part, as she is a complete deception, as when Number 2 she speaks perfect English, and without a hint of an accent!
Its would appear Number 6 isn’t very happy with Number 58, he appears he wanted to get rid of her because she didn’t speak English, because he was having a job getting her to understand him. However it could also be that it had more to do with the fact that he was annoyed by her, that she wouldn’t go away. Well precisely, and that’s why Number 2 chose her for Number 6, because of 6’s prejudices in regard to the regular drivers. Number 2 thought she was delightfully charming. As there shouldn’t be any scenes in which Number 58 understood what either of them told her {as I say in a community that has English as it dominant language} its hardly surprising that she picked up a little English. Even though she was new in The Village!