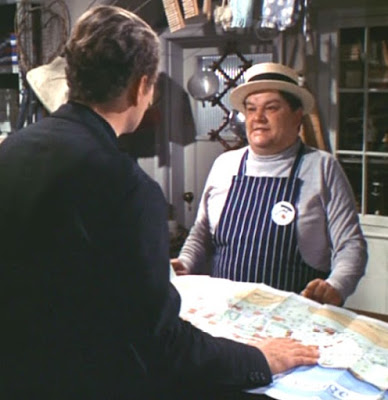 Number 56 started out as the shopkeeper in ‘Arrival,’ although there’s some discrepancy about that, as one minute the shopkeeper is Number 19, then a few seconds later he’s Number 56! Or it could be the other way around! Citizens have been known to have their number changed between episodes, but never in the middle of a scene. It’s a pity his number cannot be seen in ‘Checkmate,’ but it’s impossible to make out the number on his badge. Anyway we’ll give the shopkeeper the benefit of the doubt and call him 56. Number 56 crops up again, when Number 6 wears the number 56 badge in ‘The General’ when he’s in disguise as a member of the Board of Education! It is after that the Number 56 is assigned to Number 6’s personal maid in ‘Dance of The Dead,’ and that’s before the episode of ‘Checkmate,’ so perhaps to keep a reasonable logic, the shopkeeper is Number 19. Because we can’t have two 56’s, well we can, just as long as they are in separate episodes. Mind you there is the time in ‘Arrival’ when there are three 66’s. So it wouldn’t really matter if there were two Number 56’s in the same episode, the shopkeeper and the Supervisor. But then that brings into question what then happened to the maid after ‘Dance of The Dead?’ And with the passing of the maid, came two further disappearances of Number 56, the shopkeeper and the Supervisor of ‘Checkmate.’ Because by the time of ‘Hammer Into Anvil’ there’s a new shopkeeper in the General Store, Number 112. And by the time of ‘A Change of Mind,’ Number 56 is a rather stout, forthright, and severe woman who gives a very good impression of being the leader of the Ladies Sub-appeal Committee. And that’s the last we see of the Number 56.