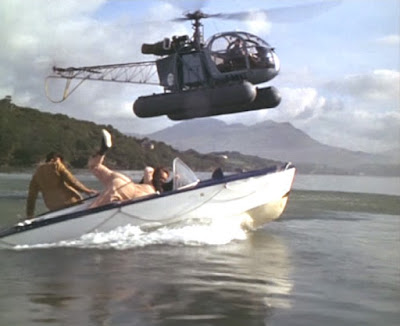 Number 6, having apparently come to his senses, steals a Jet boat, and in having fought off the two motor mechanics attempts to escape, while being pursued by Number 2 in the helicopter. The person throwing himself overboard into the water boat is not Patrick McGoohan, but a local man to Porthmadog, who played the role of Number 6 at the wheel of the boat and eventually ended up in the water, because Patrick McGoohan couldn’t go into the water at that time as he had an ear infection.
I like the character of Number 58, she is quite charming. As for her character of Number 2, I’d hate to think what she’d like to do to Number 6. I bet she could think of many ways and means to bring hurt and pain to him!
I don’t think Number 6 was goaded into standing for election. I like to think it was a mixture of gentle persuasion and Number 6’s predictability. They knew that Number 6 wouldn’t be able to resist standing for office, because the vote for No.6 placard, and other placards had already been fabricated. Its interesting how Number 6 told the electorate that he intended to discover who the prisoners and who the warders, but it isn’t until ‘Checkmate’ that he discovers who some of them are!