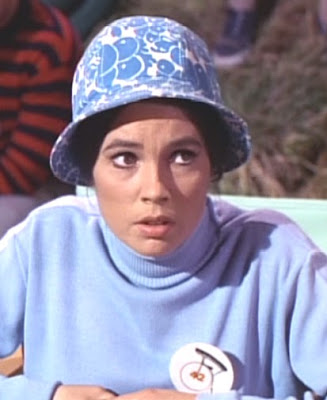 I wonder what happened to Number 42, oh yes, he became a painter in Checkmate. He’s the one who said if they weren’t satisfied, he’d paint it again, well perhaps not in so many words, but that’s the gist of it. But that’s the number, not the man, what happened to Roland Walter Dutton, the previous Number 42? One can only imagine that the termination order against him had been implemented, despite the doctor going too far with his experiments with Dutton, which left him an inane imbecile! But of course after that episode of ‘Checkmate, we never see Number 42 the painter again, when he and the others were supposed to have been put back on the Chessboard. But the number does turn up again, it’s been reallocated to a young woman suffering from depression. She’s always in tears, seems to be in a permanent state of depression. At the social group meeting says she is a poet, and because she was composing poetry at the time, she missed Number 10’s greeting. But Number 42 certainly gets around, because becoming a member of the ladies sub-appeal Committee does her a bit of good, as she’s suddenly found a social conscience. To volunteer for work of this nature requires considerable moral courage. But such social work brings risk of infection from the untouchables. “Bitterness will not help you Number Six, you have brought your misfortunes on yourself!” Number 42 from being in a permanent state of depression, to a forthright, robust, and accusing member of the ladies sub-appeal Committee in one fell swoop, even Number 6 is surprised by that. So what happened to Number 42 to have her character altered so drastically, and in so short a time?