A Favourite Scene in Dance of The Dead 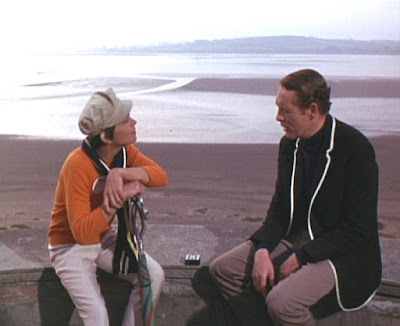 I suppose this will always be a favourite scene, because when I watch it, it always brings back happy memories. Number 6 is sat on the Belvedere Outlook listening to a transistor radio.
“Nowhere is there more beauty than here. Tonight when the moon rises, the whole world will turn to silver. Do you understand, it is important you understand. I have a message for you, you must listen, the appointment cannot be fulfilled. Other things must be done tonight. If our torment is to end, if liberty is to be restored we must grasp the nettle even though it makes our hands bleed. Only through pain can tomorrow be assured.”
{I’m still convinced that the radio announcer reading that passage is actor Eric Portman-Number 2 from ‘Free For All.’}
Meanwhile Number 2 and Number 240 are coming up to the top of the Outlook via a few steps, three at the most.
“You’re right my dear” says Number 2 “too old for these stairs.”
They catch Number 6 listening to the radio, asking where he got it, and does it work? He quickly re-tunes the radio.
“That dictation was at sixty words a minute. Now here is a passage from the wartime memoirs.”
“Hardly useful” Number 2 tells him switching off the radio “the view’s lovely from here. I’m sad, Number Six. I thought you were beginning to…..”
“Give in?”
“Be happy. Everything you want is here.”
“Everything’s elsewhere.”
“Don’t force me to take steps. We indulge any member of our community for a time. After that….”
“Yes I know. I’ve been to the hospital. I’ve seen.”
“You’ve only seen a fraction”
“I know where you stand don’t I?” Looking at Number 240
“She’s one of our best observers.”
“We have one each?”
“Only our more fractious children. Shall we go down?”
Number 6 gets up and stands on the very edge of the Outlook.
“You’re not thinking of jumping?”
“Never.”
I suppose this scene has become a favourite because my wife and I performed the scene at Prisoner Conventions between1994-1997, as pictured below 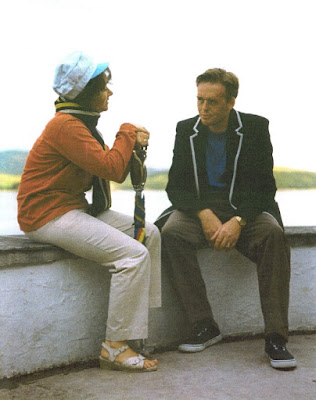 The photograph was taken during the 1997 Convention. The Belvedere Outlook could only hold so many people in the audience, and there were so many people who wanted to watch the re-enactment, that we had to perform it twice!
Of course after this the conversation turns towards Number 240 who has her duty, to everyone. It’s the rules you see, of the people, by the people, for the people. She sees Number 6 as a wicked man, that he has no values. But his values are different. He won’t be helped, destroyed. She accuses Number 6 of wanting to spoil things, but he refuses to be a goldfish in a bowl. Number 240 says she must go, and asks if she may see him later. But how can she avoid that, being his Observer, and Number 6 knows it!