One Egg Or Two? 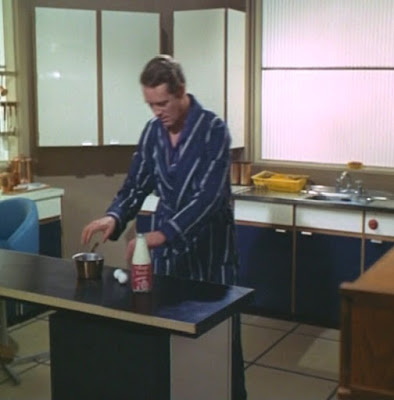 It seems that by the time of the morning of ‘The Chimes of Big Ben,’ Number 6 has taken to only having two boiled eggs for his breakfast when before he was used to a more hearty breakfast. Tea, Indian or China, but with lemon, two fried eggs with bacon, and toast. Then when his personal maid Number 54 brought him his breakfast it consisted of a pot of tea, sugar and milk, toast, a glass of orange juice, cup and saucer, and a red napkin, but no butter or marmalade! Later of course he became used to more international cuisine, a poached egg on a slice of quiche. But that’s if one keeps to the library order of ‘the Prisoner,’ and not the actual screening order of the series. We have both ‘Dance of The Dead’ and ‘Free For All’ taking place before ‘The Chimes of Big Ben.’ That suggests to me that Number 6 having had his breakfast brought to him was a privilege, but by the time of ‘The Chimes of Big Ben’ that privilege had been rescinded! So from then on Number 6 had to make his breakfast, unless he had someone like Number 8 come along and boil his two eggs for him. But why just two boiled eggs when he was used to a more substantial breakfast? Perhaps living alone Number 6 couldn’t be bothered cooking for himself, perhaps that’s why he is sometimes seen having a simple ham sandwich and cup of tea or coffee for his lunch!