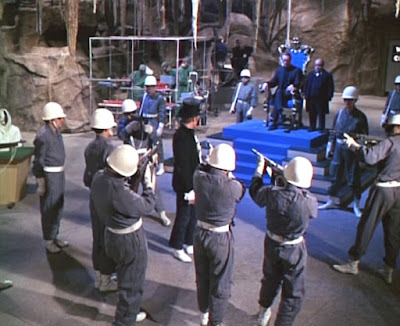 Number 48 had been caught in a ring of steel, well almost. Made up of “snowdrops” armed with American made Thompson submachine guns. Snowdrop being slang for an American military policeman, being an allusion to the white helmets, gloves, belts, and socks {in this case white boots} during the Second World War. And this isn’t the first time “snowdrops” have been seen operating in The Village. The first time was in ‘The General when two snowdrops were patrolling the underground corridors, although at that time they were actually wearing white Polo helmets. And a small unit of snowdrops who were assigned to take Number 6 forcibly from his home in ‘Do Not Forsake Me Oh My Darling’ although once again wearing white Polo helmets.
So what are American military policemen {observe their helmets} doing in The Village? Obviously maintaining security!
Be seeing you
Posted by David Stimpson at 07:42