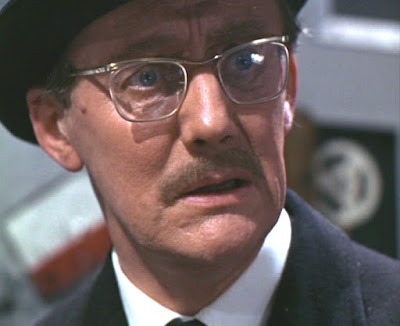 I find it difficult to make up my mind where it’s you, or Number 2 of ‘Do Not Forsake Me Oh My darling, or of ‘Living In harmony,’ who suffered the worst defeat of any such Number 2. People died in all three episodes, the Colonel in one, Number 8 and 22 in the other. Yes Doctor Seltzman did manage to escape The Village, but at least the Seltzman machine was retained, and the reversal process attained. In your case both the Professor and Number 12 of Administration lay dead, so that puts you on a par with Number 2 of ‘Living In Harmony.’ But the General has gone up in smoke, destroyed beyond repair, which in turn brought about the collapse of the educational experiment of Speedlearn. A complete disaster! What’s more you suffered defeat twice at the hands of Number 6 having underestimated him on both occasions. I’ve just made up my mind! In my opinion it’s you who suffers the worst defeat of any Number 2. I should have thought you would have learned your lesson about Number 6 the first time round. If you had controlled his involvement……...lets face it Number 6 should never have been involved in the first place. You were far too easy on him, in that you allowed him to be far too clever for your own good!