Time On His Hands! 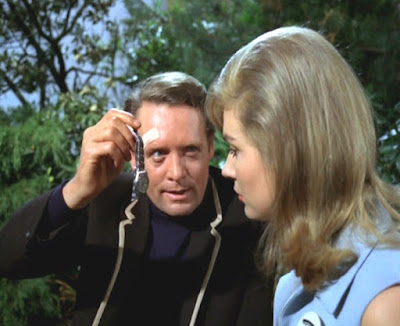 When it comes to wrist watches Number 6 wears different ones from time to time. His own watch with a nylon band which becomes waterlogged, and gives to Karel in the cave during ‘The Chimes of Big Ben,’ in exchange for Karel’s own watch, is the same one he wears at the start of ‘The Schizoid Man,’ If Number 6’s own watch had been waterproof, there would have been no need for the exchange of wristwatches, and the end result would still have been the same, seeing as his own watch would have been set at Village time, the same time as London Greenwich meantime!
During ‘The Chimes of Big Ben,’ Number 6 is given a wristwatch by Number 9, a Hamilton automatic. Except this watch has one other function, as an Electro Pass, which synchronizes with the alarm system and allows Number 6 access to the helicopter. Number 2 told Cobb that he would allow Number 6 to keep the watch, just as a reminder that escape was not possible. But was that wise? Certainly Number 6 never tried to make further use of that Electro Pass, nor did he wear it on his wrist as a watch.
In ‘The Schizoid Man,’ Number 6 starts out wearing his original wrist watch with the nylon band, which means that Karel must have handed it in, the watch repaired at the little watchmakers shop at some point, and given back to Number 6! But then it’s taken away from him again, because later in the episode he’s wearing a watch with a chrome strap instead, but it’s unclear where Number 6 got that watch.  Then in ‘The General’ Number 6 has another wristwatch, this one has a black leather strap, the same one in ‘It’s Your Funeral,’ which is replaced by Number 100 with an identical, one but its not working. So Number 6 takes it to the watchmakers shop to have it repaired.
It’s just a thought, but might it have been the Watchmaker-Number 51 who worked on that wristwatch in order to insert the Electro Pass transistors? Also Number 6 was abducted to The Village in only what he was wearing at the time, no other personal belongings came with him. So where did Number 6 get that expensive Tissot wrist watch he uses to hypnotize Number 86 in the above picture {costing between £210 and £1,300 in today’s prices} from? It might well be that the Watchmaker sold it to him, the watch being a special import, like the Cuckoo clocks, records, and cameras sold in the General Store in ‘Hammer Into Anvil.’ So how much might an expensive Tissot watch cost in Work or Credit Units?