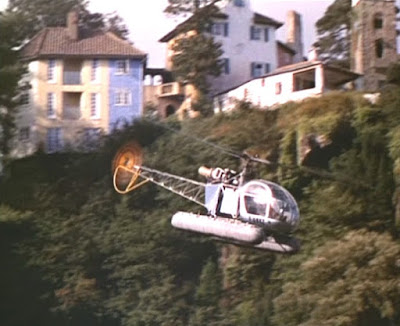 The detonator device was Number 2’s passport out of The Village, Number 6 told him to take it and go. Many fans have wondered why Number 6 didn’t take advantage and escape The Village himself? In the case of the recently retired Number 2, Number 6 was on hand to see that the new Number 2 didn’t take any action while his predecessor was leaving The Village.
“And so the great day is nearly over, went off rather well, better than planned. And now you can look forward to your own retirement, and I’m sure they will plan something equally suitable for you, when the day comes.”
But in Number 6’s case, who was there to delay Number 2 from taking action as Number 6 had done? The only person I can think of is Monique, but she was too busy attending to her father! In any case the recently retired Number 2 didn’t escape The Village, he came back of his own free will, or at least that is the impression given at the end of the episode when the helicopter turns back to The Village! Well what was the point? They would have caught up with him eventually wherever he went. So perhaps he decided to cut his losses and go back to The Village, where he could live out the rest of his life in the peace and comfort of the Old People’s Home. After all he had achieved so much for The Village. Now The Village could look after him seeing how good a welfare policy they have. Knowing how to look after their senior citizens!