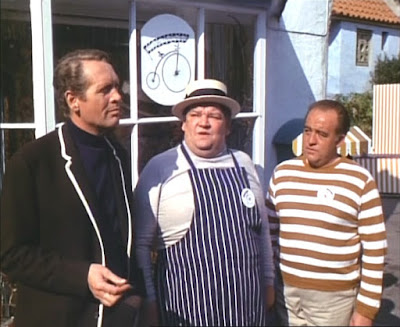 “Yes gentlemen?”
“I’d like some lead for my propelling pencil, and my friend here would like some stick jaw.”
“Stick jaw, what’s that when it’s at home?”
“Homemade toffee.”
“Well why didn’t you say toffee?”
“Is it homemade?”
“Well I don’t make it, I only sell it.”
“So it’s not homemade?”
“I could say that Number Thirty-eight makes it.”
“What, you mean the old woman whom I bought that tapestry from, time at the Arts and Crafts exhibition?”
The Rook “Did you?”
“Yes.”
“That was kind of you.”
“Not really, it cost me two thousand work units. So Number Thirty-eight makes stick jaw now does she?”
“No.”
“But you said she did.”
“No, what I said was, I could say that Number thirty-eight makes it.”
The Rook “What about penny chews?”
“Penny chews, don’t sell them.”
“Black Jacks?”
“No.”
“Bubble gum?”
“I used to sell bubble gum, but people would spit it out onto the roads and paths, and there were complaints about it. It’s the very devil to remove you know. So Number 2 put a stop to my selling bubble gum!”
“What about sherbet dabs, lucky bags, oh and acid drops?”
“No, I don’t sell any of those, I’ve got chocolate limes, liquorice allsorts, pineapple cubes, humbugs, and hundreds and thousands, gobstoppers, lemon sherbets, pear drops, and honeycomb……...”
“Chewing nuts?”
“Not since I’ve been using the talcum powder!”
“Well I’ll take a quarter of a pound of dolly mixtures, a bar of fruit and nut, and a packet of love hearts!”
“Never mind about all that, what about the lead for my pencil?”
“Hb, H, or HB4?”
“HB.”
“Sorry sold out!”
“Cigarettes?”
“Yes, no, don’t tell me you want twenty Number Six!”
“You trying to be funny?”
“Obviously not. Well come inside gentlemen I’m sure I can sell you something. I do a nice line in gentleman’s magazines, village pin-ups that sort of thing. Strictly under the counter service you understand.....”