What I don’t understand is this. How can so much in ‘the Prisoner’ be happening this month fifty years ago? After all so much action taking place after Feb 10th over laps, and during no less than three episodes all at the same time! Obviously it’s the fault of both the scriptwriters, producer, executive producer, oh yes, and the director! No-one seems to have given it much thought, or perhaps they didn’t expect ‘the Prisoner’ to be scrutinized so closely. But then it’s only a television programme, it’s not a religion or anything, its just that a cult has grown up all around it that’s all. And just think, if ‘the Prisoner’ had turned out perfectly, enthusiasts of the series wouldn’t have had anything to talk about, discuss, debate regarding ‘the Prisoner’ these past fifty years! Mind you if the date Feb 10th had not appeared in two episodes one third of the problem could be taken out of the equation. But even that wouldn’t have stopped the fact that it was fifty years ago today on Wednesday February 22nd, exactly to the day, that Number 6 set sail aboard his sea-going raft. 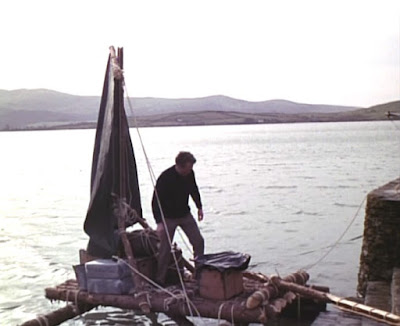 It had to be on this day in order to take into account the 25 days he spent at sea, in order for him to arrive back home in London on March 18th.  Whilst at sea his diet consisted of cold baked beans, corned beef, and pears eaten straight out of tins. Mind you its possible that that diet began even before Number 6 set sail. It may be reasonable to suppose that it was on February 20th when he woke up to find The Village deserted. It is calculated that he would have needed at least a day or two in order to fell trees, empty oil drums, and build his raft. I say a couple of days, because it’s unlikely that Number 6 completed the construction of his raft in a day. But then like most things in ‘the Prisoner’ it’s all a question of time! And seeing there was no electricity it would mean Number 6 would have already have been eating cold food. Unless of course he made a campfire taking food and using utensils taken from his home to cook it!