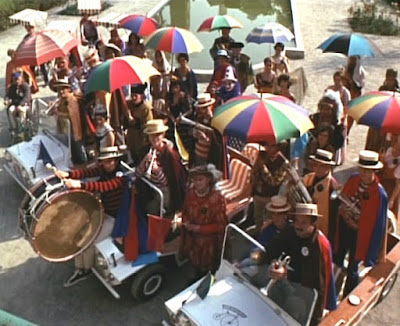 They’re a happy bunch of citizens if ever there were any! Perhaps because it’s Carnival, with music, dancing, happiness....by order! So whether they like it or not they will enjoy themselves. Oh yes you can dress people up in fancy dress costumes, but even then you can’t make people look as though they are having a good time outside. But you can huddle a group of people together in such a way as to make the crowd of people look more than they are in number. Number 6 thought everyone looked to be having a good time outside, he even told his housemaid that. He obviously didn’t observe the expressions on their faces too closely. No-one was cheering, and I expect the Brass Band was playing the musical instruments, as both were played over the public address system! Enforced happiness, I can think of nothing worse!